George chewed walls: his father tried wall pills to cure him, but his head grew into a house. John had wings for ears; his head flew out of the window, and his mother stuck it back on with chewing gum. Humbert was beautiful but mean to girls. His sister put a crocodile in his bed, but it was charmed by his lovely face: boy and croc teamed up, making Humbert meaner than ever.

Welcome to Leche del sueño (The Milk of Dreams) fables told by British artist and writer Leonora Carrington to her children in Mexico during the 1950s (and first published in 2012). These stories of curious creatures and fantastical structures have provided both title and guiding spirit to Cecilia Alemani, curator of this year’s Venice Biennale. Her central Biennale exhibition will be punctuated by five displays that reach into the past for lesser-known works that resonate with contemporary concerns, kicking aside the idea that art movements proceed one another in an orderly chain, to find echoes and connections across centuries.

Alemani looks to artists who remained marginal because of gender, geography or social circumstance. Among their number are spirit mediums, political agitators, self-taught outsiders and surrealists. Within this last group, Alemani’s ‘Milk of Dreams’ shares much of its cast with ‘Surrealism Beyond Borders’, an exhibition addressing the movement as an enduring global tendency, shown last year at The Metropolitan Museum of Art, New York, and currently at Tate Modern in London.

In The Militant Muse (2017), art historian Whitney Chadwick recalls British artist and surrealist Roland Penrose dismissing her plan to write about the women of surrealism: ‘They weren’t artists’, he told her in the 1980s. ‘Of course the women were important, but it was because they were our muses.’ In Alemani’s ‘Milk of Dreams’, the ‘muses’ bite back (if posthumously), among them Penrose’s first wife Valentine Penrose and her close close friend and sometimes lover Alice Rahon.

A poet, the cut-up verses of Valentine Penrose’s most-celebrated work, Dons des féminines (Gifts of Women, 1951) are illustrated with nightmarish photomontages of fashionable Edwardian women and giant insects. She was also nifty with a paintbrush: her ex-husband retained her sardonic self-portrait in which she presents herself as an offering from Venus, flashing a hairy armpit and abundant bush. In the 1930s, feeling crushed by the intellectual pretentions of the Parisian avant-garde, Valentine travelled and studied in India (on one occasion, rapturously, with her beloved Alice), where she searched for a ‘female principle’ to counterbalance patriarchal European culture. 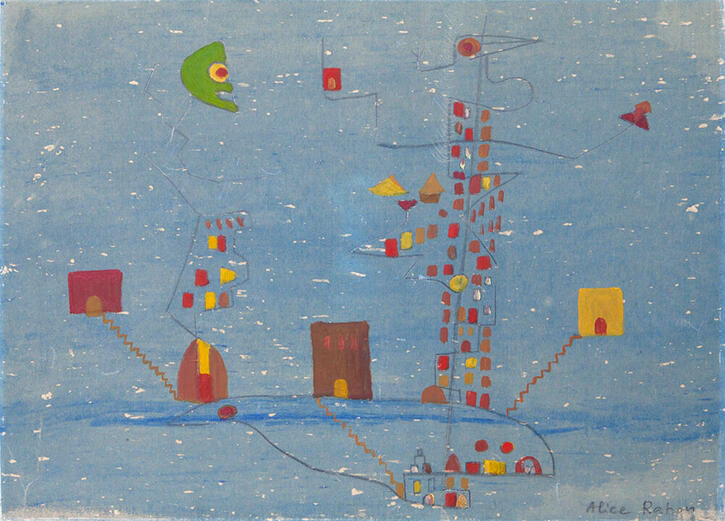 One of Alice Rahon’s own paintings is titled – pointedly – Las musas inconformes (The Unhappy Muses, 1959). Like the beautiful Valentine Penrose – painted over again – Rahon was objectified, cherished as the living incarnation of that Wonderland Alice whose adventures captivated André Breton and his circle. Her first love, too, was poetry – though she published under her married name, Paalen.

Rahon painted in Mexico, her home following the outbreak of World War II. Her scratched and spindly forms set within rich floods of cobalt and vermillion suggest Paul Klee hanging out at Frida Kahlo’s Casa Azul. Rahon’s floating, ghostly carnival of yellow figures suspended in an intense field of azure – La Balada para Frida Kahlo (The Ballad for Frida Kahlo, 1955–56) – hangs in ‘Surrealism Beyond Borders’ alongside the dark, fairytale paintings of Remedios Varo. Born in Spain, Varo was part of the circle of surrealist exiles that formed around Kahlo and Carrington.

In her writing, Rahon compares a painter to a shaman performing as a conduit for visions. She shared an interest in magic and the occult with Varo, whose meticulous, enigmatic figures are surrounded by uncanny patterning created with decalcomania – paint transferred from a textured surface – a technique favoured for its chance outcomes. Varo’s sculpture includes the wheeled zoological ‘specimen’ Homo Rodans (1959), assembled from chicken bones, and presented complete with a pompous scientific treatise.

In 19th-century Europe and the US, spirit medium was a rare role in which women were considered to have superior aptitude to men, and through ‘guided’ drawing, could engage in liberated creative practice. Georgiana Houghton consulted a psychic in London following the death of her sister and started spirit drawing as a medium in 1861. Led by spirit guides – first a deaf artist called Henry Lenny, then an illustrious cohort including Titian and Correggio, and later a dedicated group named Zacharias, John and Joseph – Houghton produced wild swirling abstractions in watercolour and ink that recall flowers and peacock feathers. Houghton certainly considered her spirit drawings works of art: in 1871, she made a ruinous decision to show them at the New British Gallery in London. 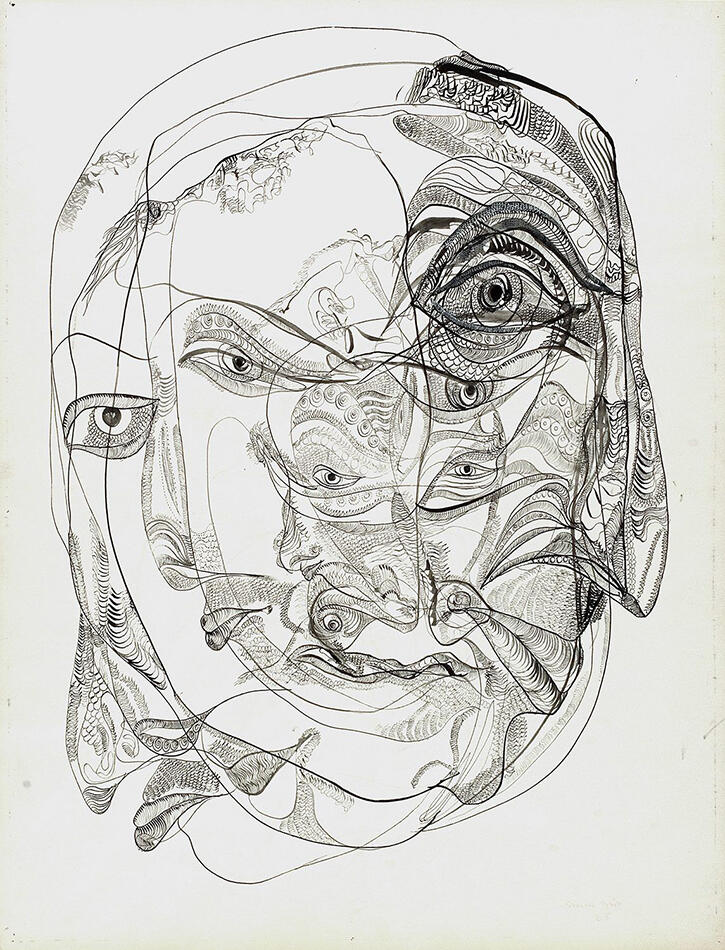 There is common ground between Houghton’s mediumistic art and the automatic drawing favoured by surrealists to access the unconscious. During the 1950s and ’60s, the German writer and artist Unica Zürn – who suffered schizophrenic episodes and was frequently hospitalised in the years ahead of her death in 1970 – turned to automatic drawing to explore her inner world. Like Valentine Penrose and Alice Rahon, Zürn played the muse within an unconventional surrealist relationship. Hans Bellmer considered Zürn the living embodiment of a doll used in his dark, erotically charged photographs. In their collaborations, Zürn‘s body takes the doll‘s place: in Tenir au frais (Keep Cool, 1958) her torso is shown from behind, so tightly trussed in rope that she resembles a stuffed joint of meat. Zürn‘s searching drawings likewise explored the sensual, fragmented body, giving form to florid monsters and chimerical beings in spidery pen and ink.

Claudia Alemani has described these women and their creative circles as the ‘fulcrum’ of ‘Milk of Dreams’. In their work – created amid the constraints of their own times – she sees a defiant faith in the possibility of self-invention, which chimes with our own. Together (she writes in the exhibition statement) they summon ‘a domain of the marvellous where anatomies and identities can shift and change, following the desire for transformation and emancipation’.

‘The Milk of Dreams’ takes place in the Central Pavilion (Giardini) and in the Arsenale, Venice, until 27 November 2022.