Stacy Frati, founder of the women’s clothing brand Sweet Pea, last week listed her three-building compound in a gated community located in the Coconut Grove neighborhood of Miami for $29.5 million.

A Florida-based fashion designer is selling her Miami residence after 20 years for $29.5 million, Mansion Global has learned.

Stacy Frati,
founder of the women’s clothing brand Sweet Pea, last week listed her three-building compound in a gated community located in the Coconut Grove neighborhood of Miami. It boasts seven bedrooms and nine bathrooms over 15,000 square feet of indoor living space on about three-quarters of an acre.

“It’s more than just a home to our family, it’s our private paradise,”
Ms. Frati
said in an email. “Driving through the gates into the courtyard still takes my breath away, even after [more than] 20 years.”

Ms. Frati purchased the home in 1998 for $1 million, according to records with PropertyShark.

The main house is about 7,500 square feet, with five bedrooms and five and a half bathrooms, according to listing agent
Jill Balli
with ONE Sotheby’s International Realty. Unlike many megamansions, this home is large but still has a cozy feel.

“Sometimes when you get into a big mansion…it feels like a hotel,” she said. “Yet in the main house, it still feels like a home. If somebody needs to yell upstairs for dinner, it can be done and you’re not going to hear a big echo.”

Related  Will NFTs, Kanye West and high-fashion collabs help Gap get its groove back? – RetailWire

Italian carpenters were brought stateside to create the kitchen, which features marble countertops and two of everything, from ovens to dishwashers to warming drawers,
Ms. Balli
explained. The fireplace in the formal living room was also imported from Italy. 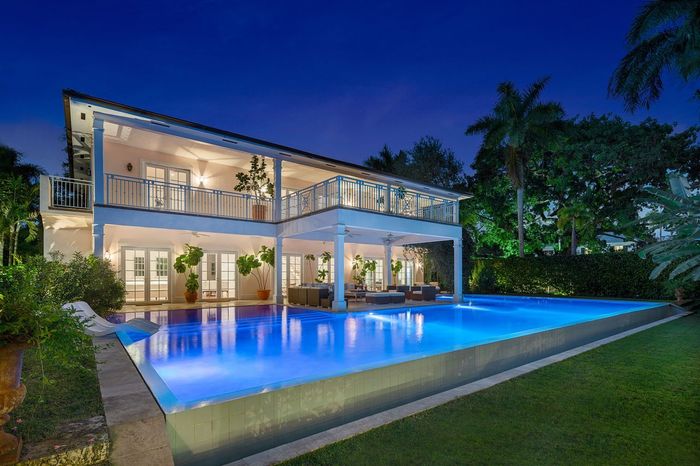 
There are four en-suite bedrooms, each with a walk-in closet, Ms. Balli noted. In addition, there’s a 5,000-square-foot cabana house with space for entertaining and “a huge guest suite,” plus a separate guest house atop a four-car garage that could also be used as an office with a conference room.

Other amenities include a home gym, a game room and a 65-foot-long pool, according to the listing.

The location of the home is another highlight, according to Ms. Balli. It’s part of The Moorings, one of the only gated communities in the city itself. Residents have waterfront access and there’s a private marina just a short walk or golf-cart ride away. Coconut Grove’s shopping and restaurants are also within walking distance.

This particular home is not on the water, giving it “complete privacy,” the agent added. It’s also about 17 feet above sea level, protecting it from sea surges and flooding.

As the migration to Southern Florida continues, some new residents—especially those with school-age children—are finding that homes located on the water in Miami Beach or on one of the islands surrounding the city are not that convenient for day-to-day living.

“There’s a lot of traffic and then you have to go over a bridge. There aren’t schools,” Ms. Balli said. “The nice thing about this is you’re close to the water and you are literally right in the heart [of the city] and within walking distance of some of the best schools in the country.”