Though women’s magazines in Japan often come with added freebies, including brand goods samples, it’s a rarity for readers of men’s magazines to get equal treatment.

On Sept. 16, however, Sekaibunka Publishing Inc. started distributing 30,000 copies of the magazine Men’s Ex, including a bonus tailor’s measuring tape.

The magazine, which focuses on men who work in offices wearing suits, decided to include this item in its autumn issue as during the COVID-19 pandemic many readers aren’t venturing out to buy clothes at brick-and-mortar stores and few likely have measuring tapes to determine their clothing specifications when buying online.

The tailor’s measuring tape that comes with the fall issue of the Men’s Ex magazine as a free gift (Provided in part by Sekaibunka Publishing Inc.

“A lot of our readers have ordered tailor-made suits so they’ve had themselves measured with tape,” said the magazine’s chief editor, Kanae Hirasawa, 44. “But not many had their own measuring tape so we thought it would prove helpful for when they’re buying clothes.”

The latest fall Men’s Ex issue also shows readers how to gauge their body width, waist and shoulder breadth with the accompanied tape across facing pages. The tape’s flip side has a space where readers can jot down their dimensions.

Sekaibunka Publishing said it was the first time for the company to provide a free bonus item with Men’s Ex since the magazine debuted in 1994.

As the prolonged states of emergency were declared for many prefectures, consumer spending has grown online at shopping and other sites.

With that in mind, according to the publishing house, a Men’s Ex editorial staff member proposed at a meeting including the tape, saying it would be “convenient if readers could determine the sizes of the garments they have with a tailor’s measure,” as it is difficult for them to determine their clothing dimensions at home for online purchases.

After the idea was adopted, the magazine’s editorial staff then tested a box to hold the measuring tape for durability multiple times and carefully calculated how thick to make the bonus item and the magazine so copies would be properly displayed at bookstores. 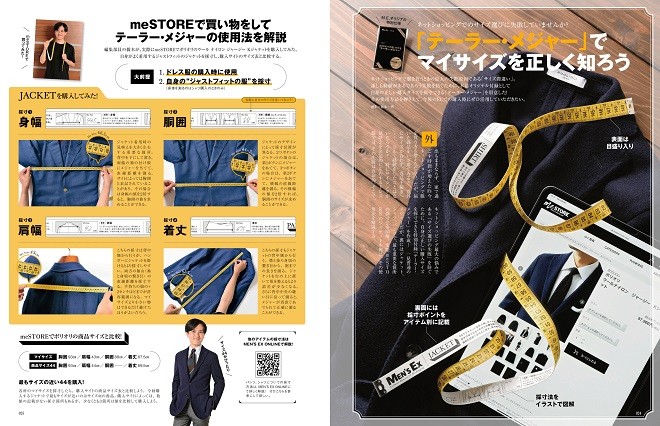 How to use a tailor’s measure is explained across facing pages. (Provided by Sekaibunka Publishing Inc.)