Princess Beatrice, the eldest daughter of Prince Andrew and Sarah Ferguson most known for her outlandish choice of hat for the royal wedding in 2011, seems now to be following the fashion lead of cousin-in-law Kate Middleton.

Beatrice, tenth in line to the British throne, was present at a Buckingham Palace garden party on Wednesday presided over by Kate and Prince William, who acted as hosts in place of Queen Elizabeth II.

The princess and her sister Eugenie are both granddaughters of the queen and have in recent years been undertaking increased charity work—though both do not officially undertake duties on behalf of the queen and are not considered “working royals.”

To the garden party on Wednesday, Beatrice wore a check patterned midi dress in pale pink and black from Self-Portrait, with a white belt and black accessories.

The brand is closely associated with Kate who has been patronizing the designers often over the course of her married life.

Most recently Kate wore a Self-Portrait dress on a rare joint engagement with the queen’s only daughter, Princess Anne, to a maternal healthcare charity’s headquarters.

Kate has become known for the small and subtle tributes she sometimes pays through her clothing and the maternal healthcare visit saw a strong example of this.

The Self-Portrait design Kate chose for the event featured two lace panels which closely resembled pineapples applied to the bodice. This has been interpreted as a showing of support to women who are experiencing fertility problems as the pineapple is a symbol adopted by this group.

It wasn’t only through the choice of dress designer that Beatrice seemed to take Kate’s celebrated sartorial lead on at the garden party. Accompanying her outfit the princess wore an oversized headband style of hat which has become a favorite of Kate’s over recent years.

Beatrice’s hat was made by Camilla Rose Millinery in their Dandelion style costing $415 (£330). The wide fringe design in black and brown geometric shapes complemented the princess’ flowing red hair.

Kate has been a fan of this style of hat since he 2019 christening of her youngest son, Prince Louis where she debuted a version by trusted milliner Jane Taylor.

Since then the royal has adopted the style with enthusiasm, wearing different variations to the christening of nephew Archie Harrison-Mountbatten Windsor, an Armistice service at Westminster Abbey, the 2022 Easter Sunday service at Windsor Castle and most recently, this year’s Anzac Day ceremony. 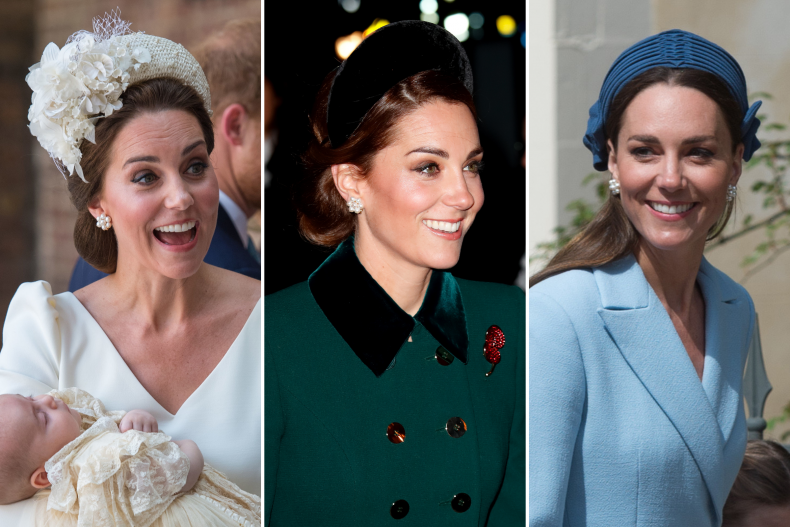 For the garden party, Kate herself re-wore a dress previously seen in 2017 which unusually was reported at the time to have been made by the royal’s “private dressmaker.”

The elegant blue flowing dress with voluminous organza sleeves and pie crust collar was paired with a hat by Philip Treacy and matching accessories.

A royal choosing to have a dress made by a private seamstress is not a new idea and Kate has had a small number of pieces made with similar origins in years past, though the identity of the dressmaker remains unknown.

The queen is the most famous royal example of having a dedicated dressmaker in her close aide and dresser Angela Kelly.

Kelly is confirmed to be creating some of the outfits which the monarch will wear during the central Platinum Jubilee celebrations in June. 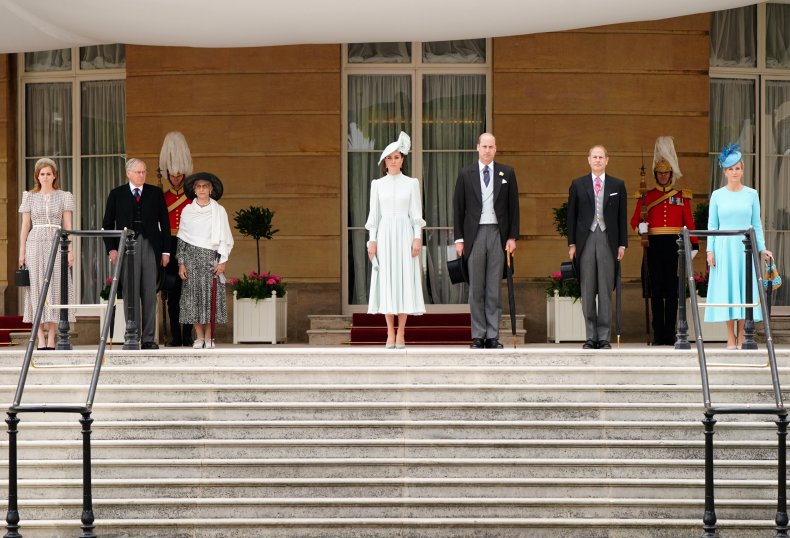 Members of the royal family gathered for the national anthem at the Buckingham Palace garden party, May 25, 2022.
DOMINIC LIPINSKI/POOL/AFP via Getty Images

Beatrice is known to be close to her grandmother the queen, and is often seen accompanying her to Royal Ascot. When the princess was due to be married during the pandemic, the queen and Prince Philip were among the number of guests limited due to government restrictions on public gatherings.

Beatrice married Eduardo Mapelli Mozzi in the private church in Windsor Great Park in 2020 and for the ceremony the queen loaned her granddaughter one of her custom Norman Hartnell white evening gowns which was worn to the State Opening of Parliament in 1967.

In a Twitter post after the dress went on display at Windsor Castle, the princess said: “It was an honour to wear my grandmother’s beautiful dress on my wedding day.”

The wedding did not pass without issue however, when the official photographs released did not include the bride’s father who walked her down the aisle, one Prince Andrew. 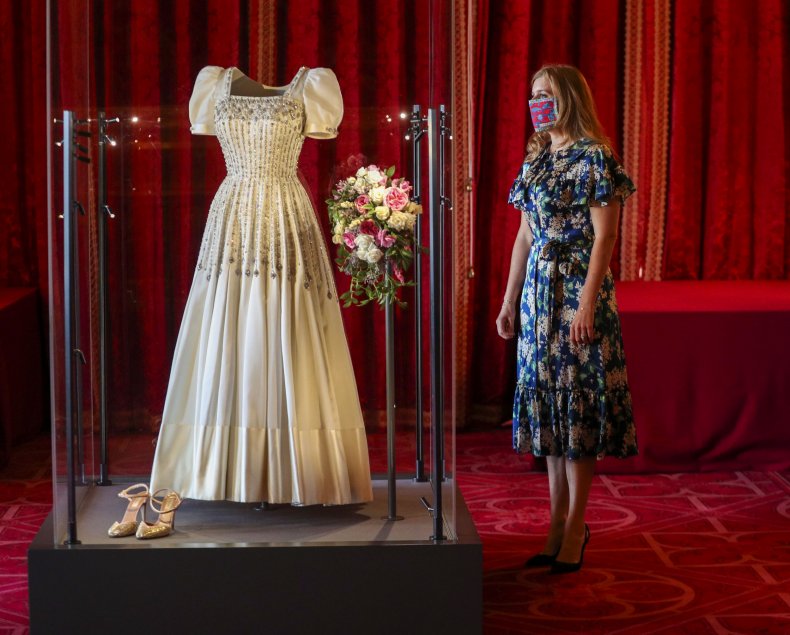 Princess Beatrice’s wedding dress was loaned to her by the queen having been designed by Norman Hartnell in the 1960s. Photographed September 23, 2020.
Steve Parsons/WPA Pool/Getty Images

The wedding came during the period of questioning around the prince’s conduct in relation to accusations of sexual misconduct by Virginia Giuffre. Only one month after the wedding, Giuffre filed a lawsuit against Andrew which he later settled for an estimated $10 million.

Despite the prince denying any allegation of wrongdoing, he stepped down from his public roles in 2019 and in early 2022 surrendered his military patronages and ceased using his HRH (His Royal Highness) title.

In September 2021 Beatrice gave birth to her first child, Sienna Elizabeth Mapelli Mozzi in honor of her grandmother.

For more royal news and commentary check out Newsweek’s The Royal Report podcast: 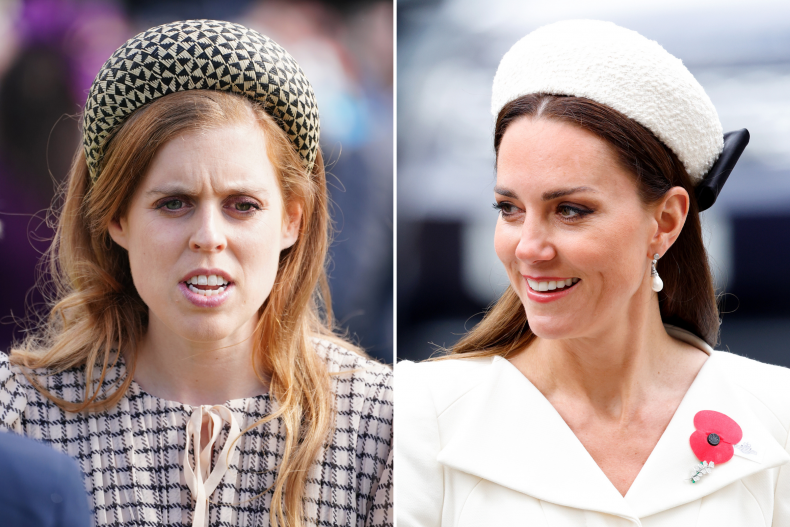