This is part of Image Issue 4, “Image Makers,” a paean to L.A.’s luminaries of style. In this issue, we pay tribute to the people and brands pushing fashion culture in the city forward.

“Fashion and pop culture gave me a space to connect with other artists, but it seemed so out of reach,” Kenneth Nicholson, a L.A.-based manswear designer, reflects on his childhood memories in Houston. “From elementary through high school, I was severely bullied. At the time, I remember seeing this silver Calvin Klein lunchbox in a magazine. It was a promotional gift for CK One. After I moved here, I went online looking for that lunchbox.”

He holds up the ’90s collector’s item. “I found it on eBay. I’m still carrying that little boy with me — the one that was teased. This represents, ‘Look, we made it. I can protect you now.’”

The 38-year-old has made a lot of progress since his time at art school in San Francisco, when he enlisted in the Navy and launched his own menswear label five year ago.

Nicholson is a recent Council of Fashion Designers of America/Vogue Fashion Fund grantee, a newly inducted CFDA member and nominee for American Emerging Designer of Year 2021 CFDA Fashion Awards. He also dressed British race-car driver Lewis Hamilton for this month’s Met Gala where Nicholson was seen hobnobbing with the likes of Rihanna and ASAP Rocky. Therefore, it’s only a matter of time before Hollywood embraces his zeitgeist-influenced, gender-fluid designs.

“I would love to dress Donald Glover, Timothée Chalamet, Frank Ocean and Zendaya,” He says. “Let’s put it out there.”

From his downtown Los Angeles studio, Nicholson shares how a rich inner life can inform fall and spring outerwear. These looks include pieces from his spring/summer 2022 Cy Falls collection which debuted this month.

How does your design approach differ?

I’m interrogating menswear, full stop. Oftentimes when we have a conversation about menswear the easy thing to do — because of the society that we live in — is to say, “If you’re advancing menswear and this is your approach, then obviously you’re trying to add womenswear to menswear and come up with a blend,” and that’s not the case at all. I want clothes that allow men to express themselves fully.

What does being “fully expressed” mean to you? 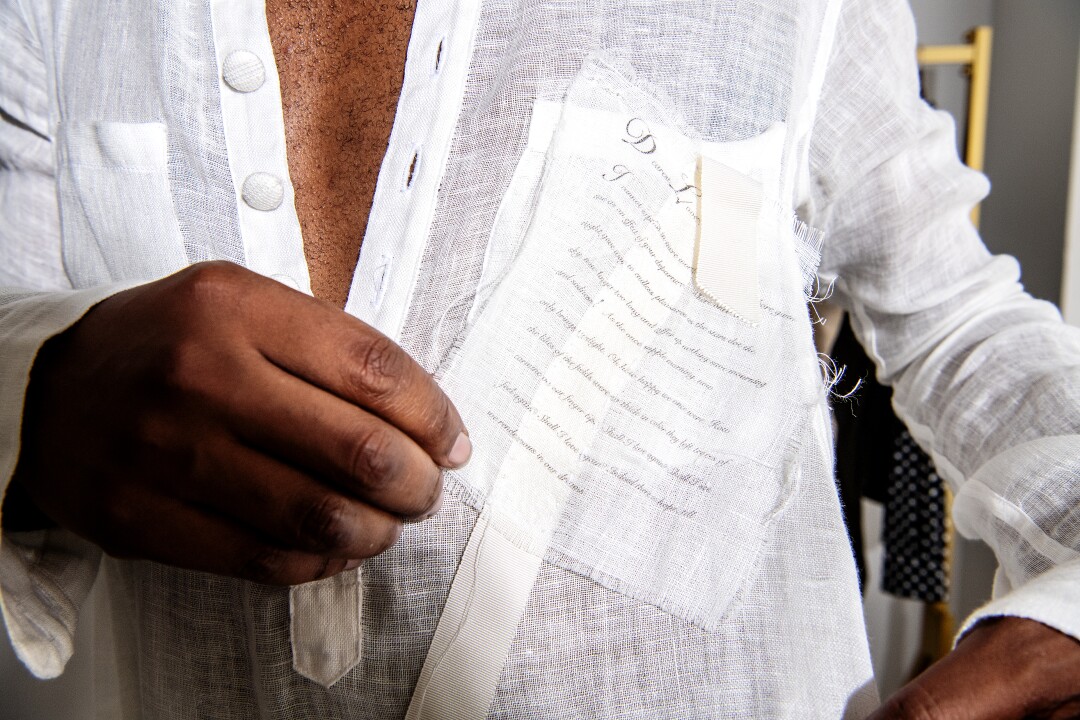 Within masculinity, there is an appreciation for men, an appreciation to emote how you dress, an appreciation for things that are beautiful and soft and might be described traditionally as more feminine. To be human and fully express oneself is to embody these qualities. I don’t think I’m redefining [masculinity]. I think I’m trying to speak to the actual definition of it. I’m recalibrating what was already there. David is a biblical character. He is described in the Bible as one who kills the giant. However, he can also play the harp and write poetry. For me, that sums up this expansive masculinity — that this guy can slay a giant and kill a lion with his bare hands, but at night he can emote and play the harp and write poetry, you know? It’s that world that I want to bring to menswear. I want clothes that move with the wind and when I walk down the street. I want clothes that feel soft on my skin. I want something that feels soft on my skin and has a touch of texture. Then next weekend, I might need a pair of jeans to listen System of a Down. It’s a full range. That’s what I’m speaking to in my work.

Related  90s fashion is back 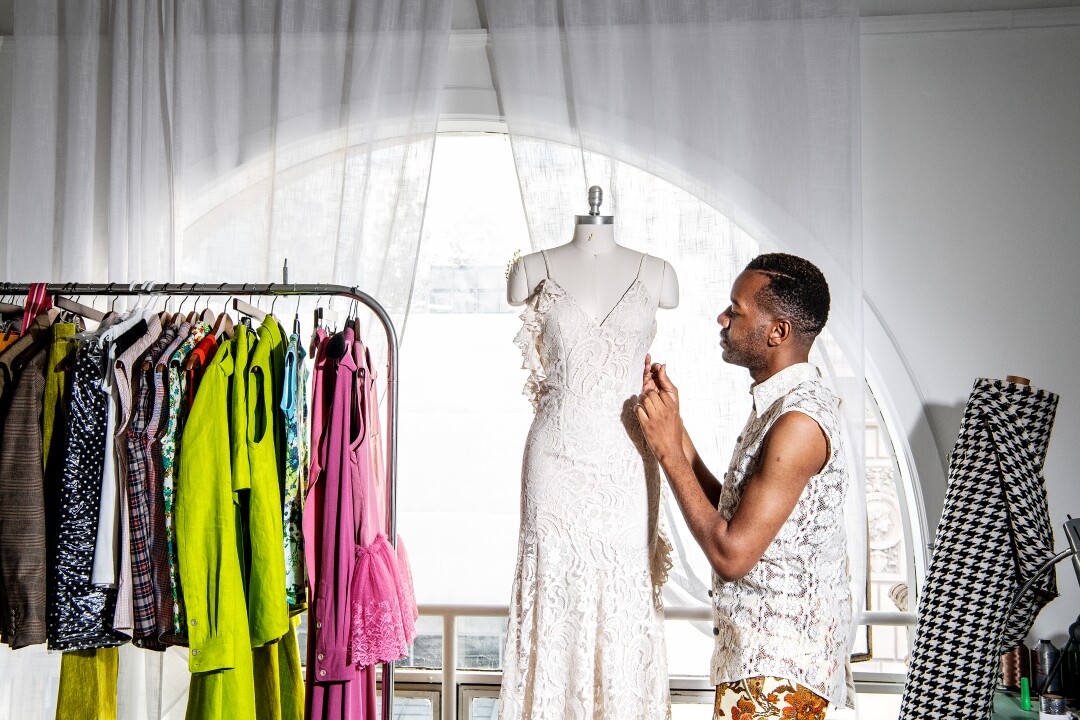 Kenneth Nicholson is wearing a sleeveless lace tailored shirt, with contrasting velvet buttons at the center front and back, paired with floral creased pants.

What inspired your latest collection?
I’m drawing from the 1990s, referencing grunge culture but not verbatim. It’s more through the lens of what I’m already doing in the fashion space. I’m a huge romantic. I love velvet ribbon, lace, flowers. I’m creating a mashup of how I would want to do grunge. I’m a big fan of music. I’ve been listening to a lot of Radiohead and Nirvana and everything in between.

What do you love about Los Angeles Kenneth Nicholson is seen wearing a look from his own label outside his studio in Los Angeles.

People describe L.A. as laid-back, but it’s actually really productive. I’m into storytelling and filmmaking, so I thought, “I can go out there and I can work on sets and eventually get into fashion that way.” That’s what led me here. I love Wes Anderson’s world. The film “Romeo + Juliet” from 1996 was great, where you have the vernacular, the style and the culture in that space. Tom Ford is a great storyteller. You really can see him in “A Single Man,” but you’re not even looking at the clothes.

Griffith Park. It’s beautiful with the turning of the leaves. I love hiking and being in the natural world. Walking around in the grass, just being. My fall uniform is nice-cut jeans with a slight cropped top and a layered Flannel. That’s going to be my look. Radiohead has this song, “Anyone Can Play Guitar.” If anyone can play guitar, anyone can indulge in the grunge era. 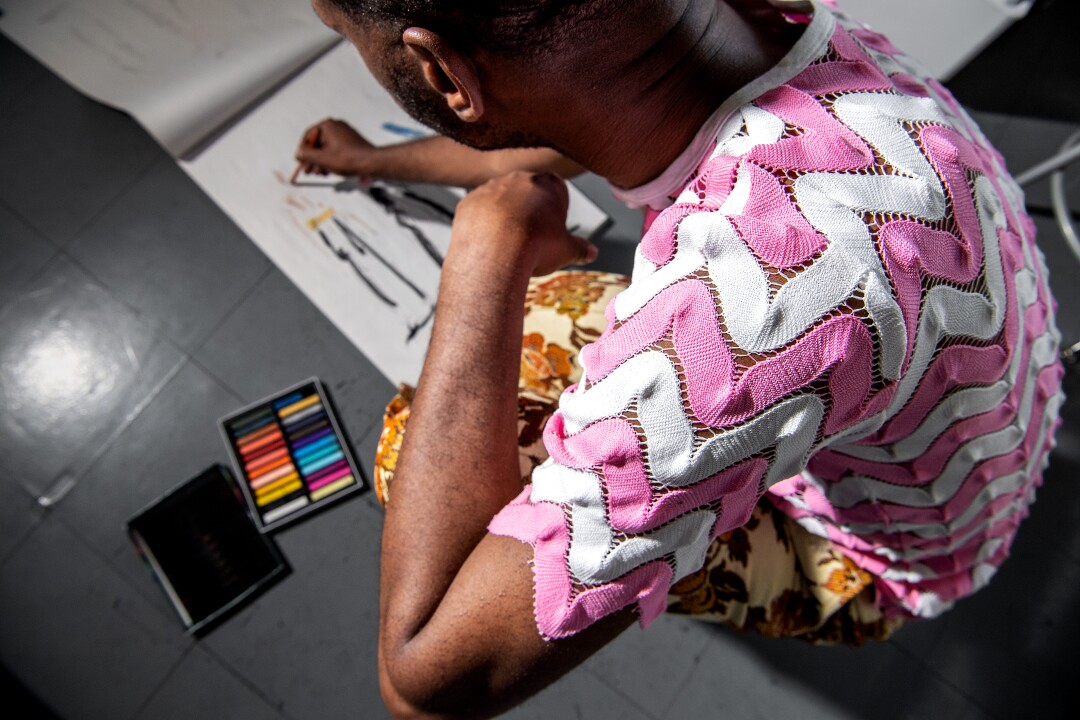 I was in Navy. I needed to leave Houston, Texas. I received this grant to study [with San Francisco’s Academy of Art University]. It was my first experience of a more liberal environment that was open to art. I had no money when I finished the program. I had no professional inroads into the fashion space or creative space. I ended up returning to Houston. It was really hard to go back, so my decision to join the Navy was made. It speaks to the unusual dedication I have to design. I enlisted, and I was honorably discharged after one year. The military probably isn’t a place for self-expression. What was it like?

It was a culture shock. I remember in boot camp, they took my division and my brothering division to the chapel for [orientation]. A high-ranking petty officer called on a few people and was like, “Why do you want to be here?” One guy said something to the effect of, “My family is traditionally in the military, and I wanted to carry on that tradition.” Another guy was like, “I want to go to college and I want to serve my country.” I raised my hand. I knew what I was about to say would probably label me for the rest of my time in boot camp, but I said, “I want to be one of the best fashion designers in the world.” I felt the need to say that because I was giving voice to why I was there, but I was also saying it in a hyper-masculine setting. It was a willingness and ability to claim what I wanted, and where I wanted it to go in my life. 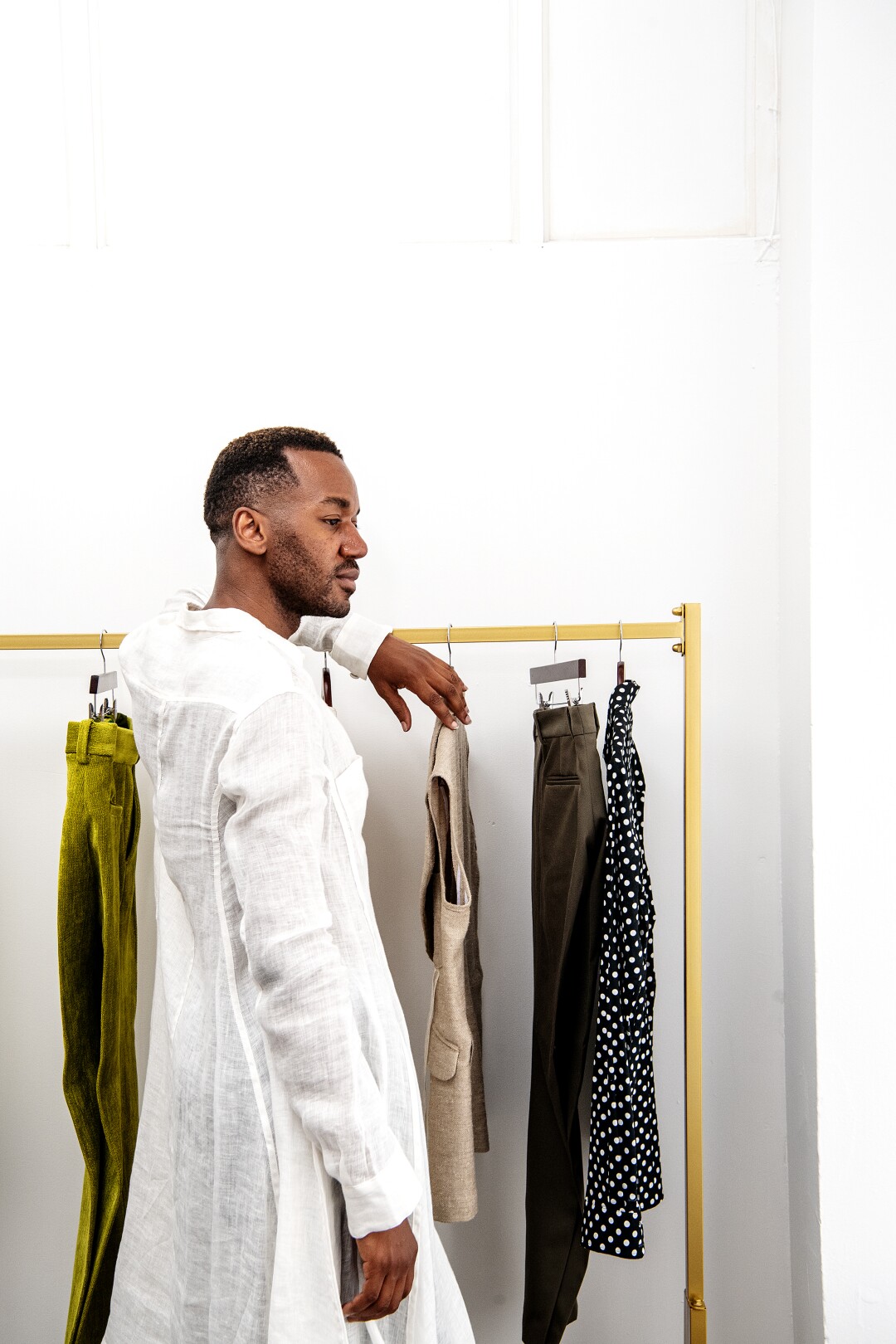 Kenneth Nicholson in his studio. Nicholson is a recent Council of Fashion Designers of America/Vogue Fashion Fund recipient, a newly-inducted CFDA member, 2021 CFDA Fashion Awards nominee and American Emerging Designer of The Year.

What’s something people might be surprised to learn about you?

I have a great sense of humor. I’m really silly, but I can also be super shy — like incredibly shy. Also, I wouldn’t say I’m a great dancer per se but I enjoy moving. My hidden talent would be cooking. I think I’m pretty good. Salmon is my go-to dish. It’s always inspiring to go to the New York Times’ Cooking channel. It just looks so nice and romantic — the way that it’s about the process. I like a lot. I’m naturally curious, so I’m always looking at things.

What’s been your craziest or most surreal moment in L.A.?

The moment I moved to Los Angeles was the most surreal. I first visited Beverly Hills in my first year of living here. I went to a store to buy ChapStick or change money. I saw this woman when I arrived. She paid for her goods, and they gave her cash. But then she literally took the dollar like this. Then she threw the money in the trashcan and used hand sanitizer. She was like, “That dollar was so disgusting.” For me, that was the memory that was like, “Oh, my gosh. This is not Texas anymore.” 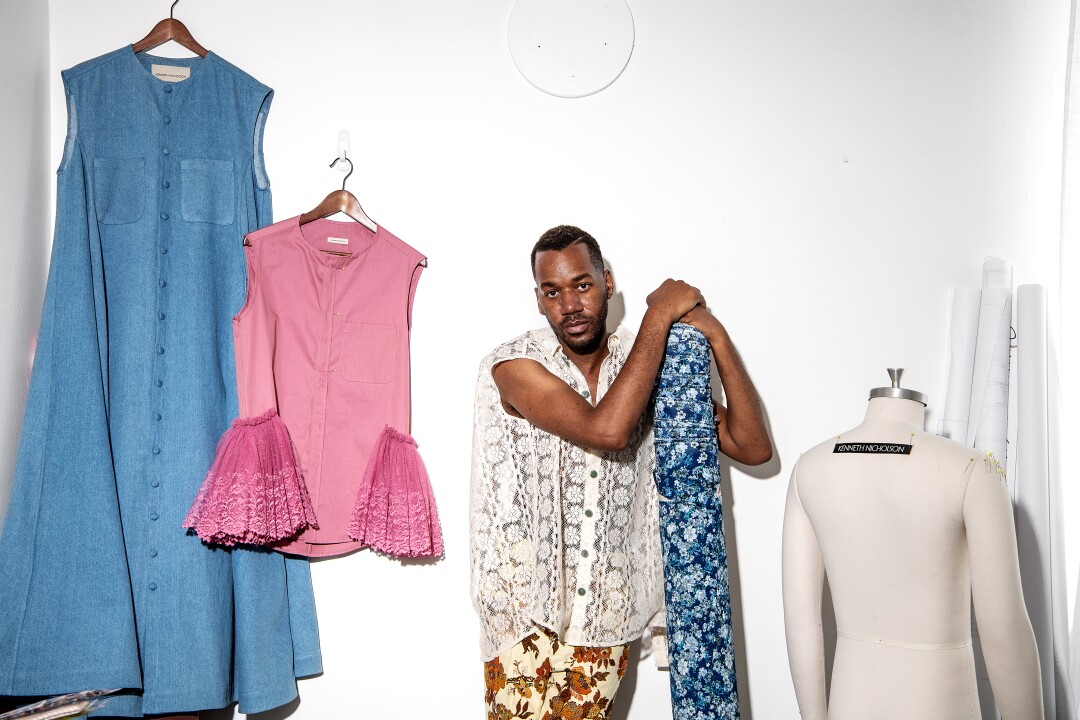 My style icon is Tom Ford. He was and remains one of my favorite designers as a child.

What would you describe as your style?

My style is fluid, honest, and free. 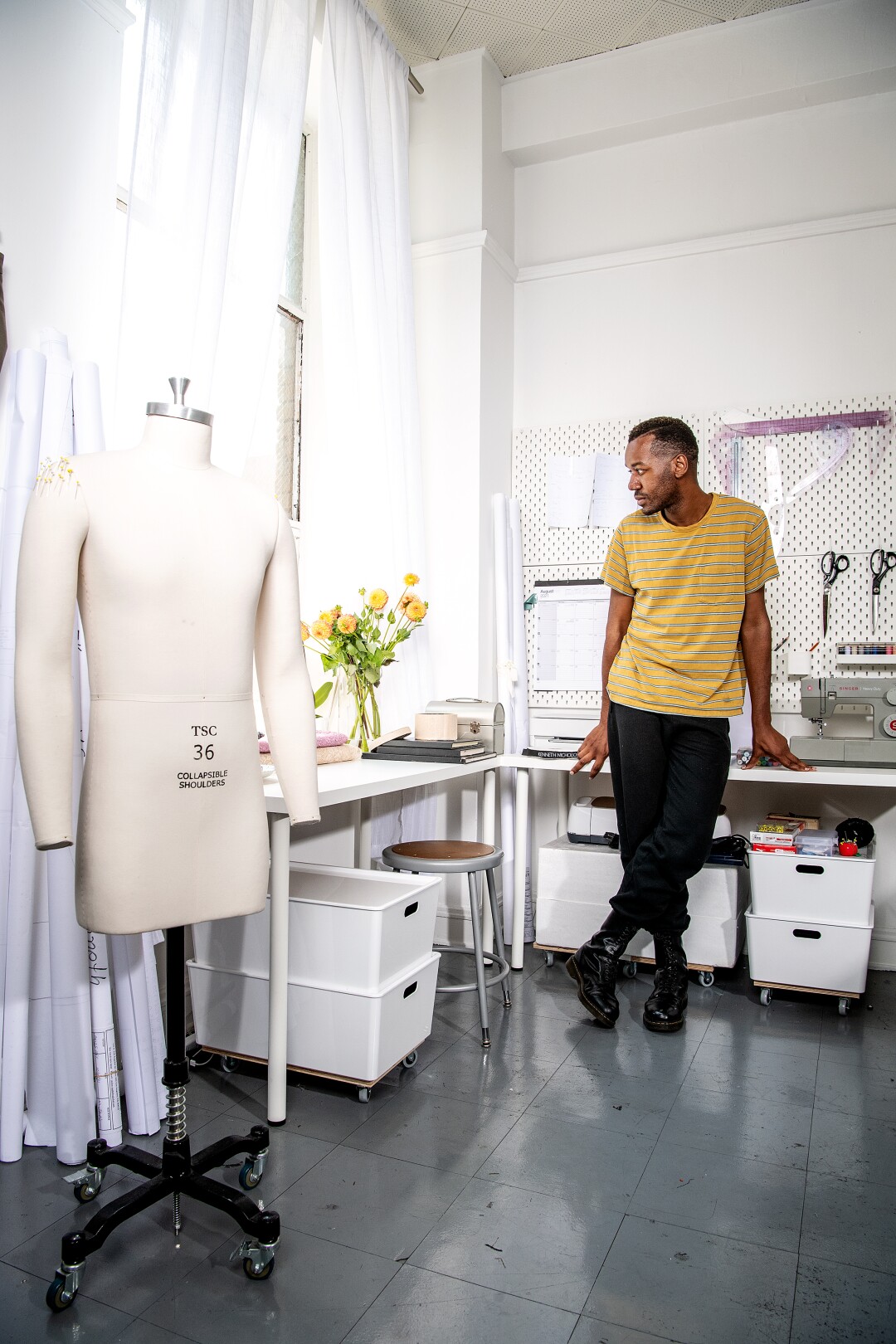 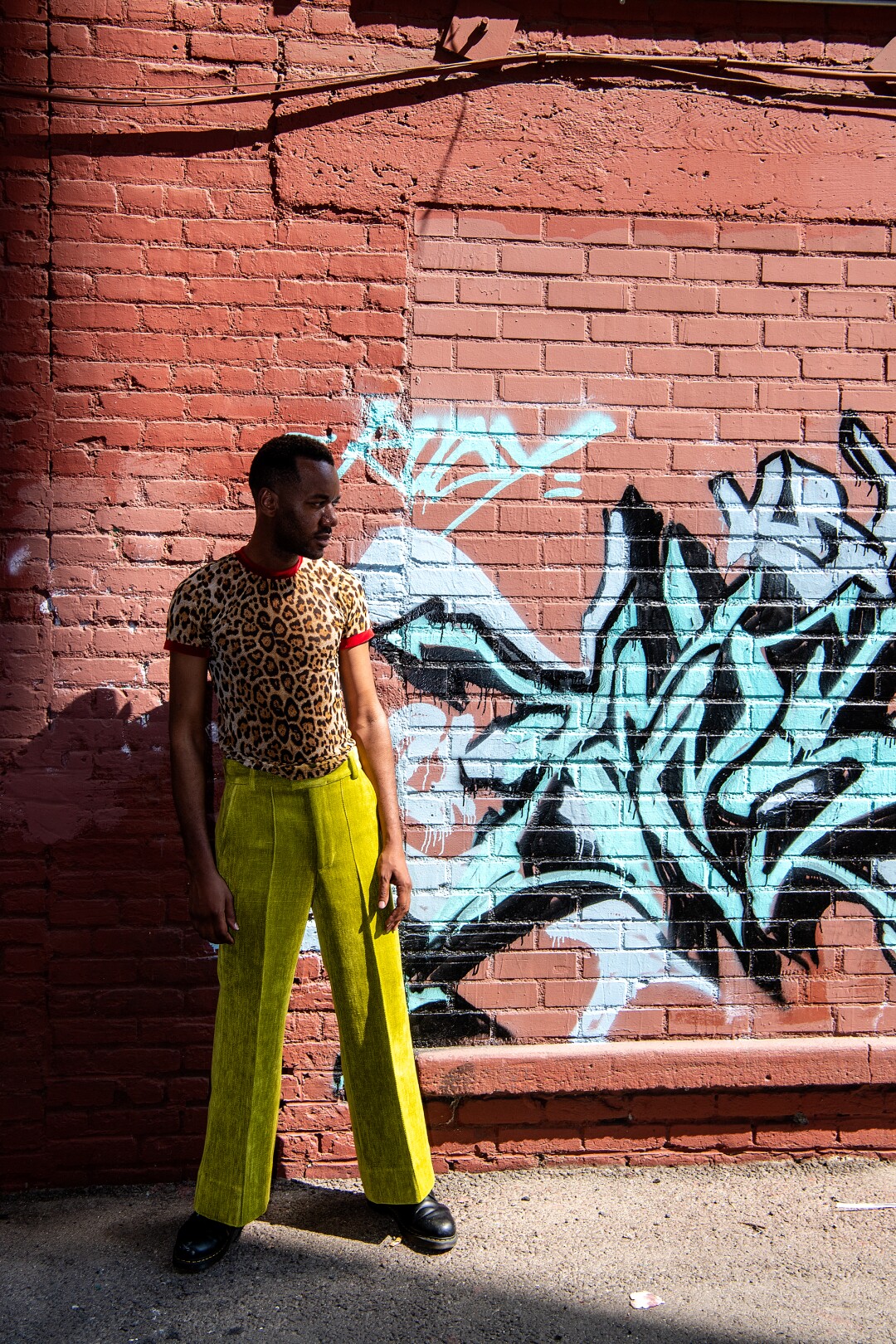 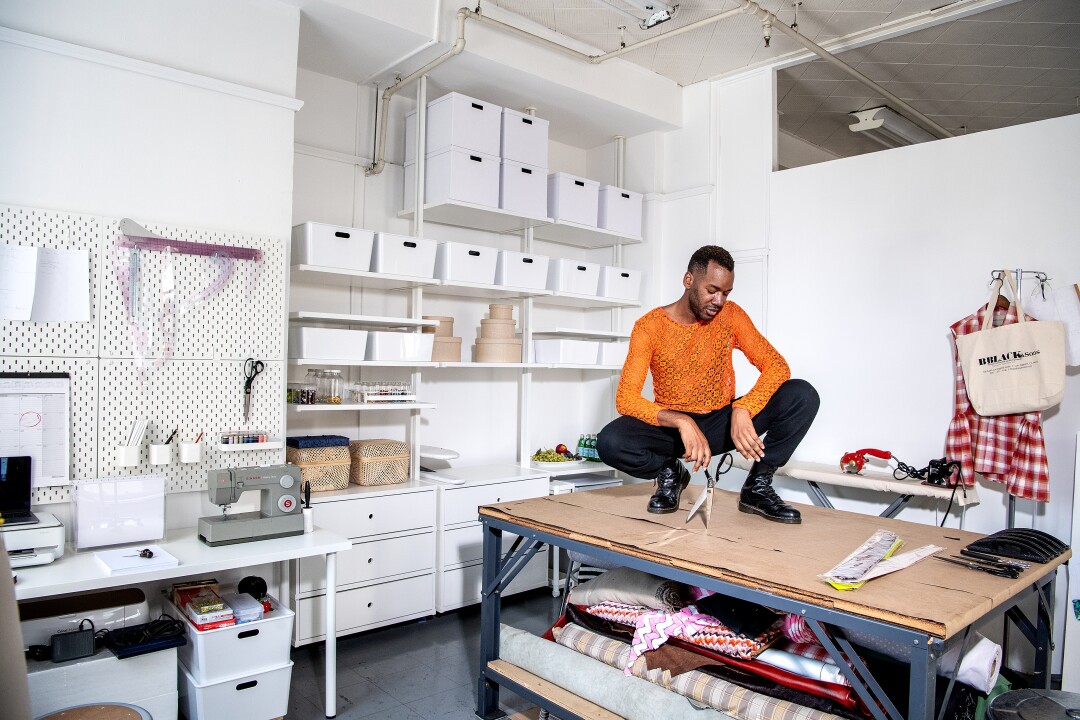 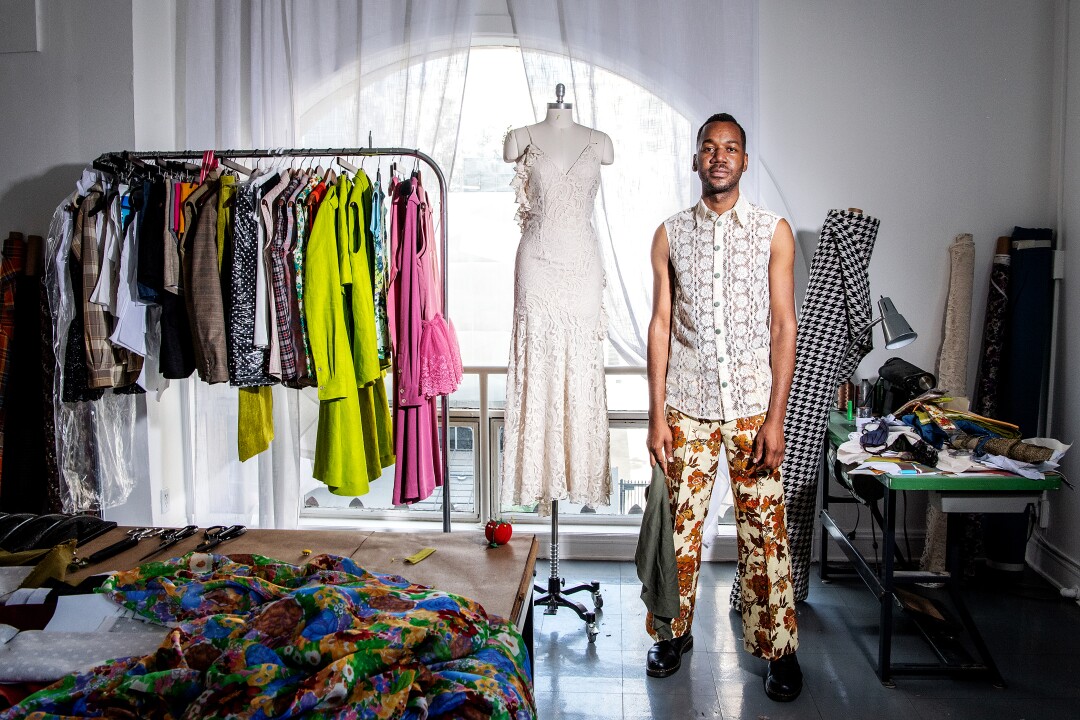