From the 90s through Y2K, Cameron Diaz was the A-list comedienne. After making an impressive cinematic debut in 1994 comedy The Mask, the actress made her mark on the rom-com genre, starring in era-defining hits like My Best Friend’s Wedding and There’s Something About Mary. Since, Cameron’s cemented her reputation as a Hollywood legend with roles in blockbuster franchises (2000’s Charlie’s Angels and Disney’s Shrek), cult indies (Spike Jonze’s Being John Malkovich), Scorcese dramas (Gangs of New York) and the Nancy Meyers cinematic universe (The Holiday), just to name a few.

From funny girl to dramatic lead (and back again), Cameron’s personal style has enjoyed as many delightful twists and turns as her filmography. The 90s saw the actress decked in the decade’s soft minimalist — all baby tees, fitted sweaters and slip skirts — while the 00s saw Cameron dabble in a maximalist, proto-boho look. Think skinny scarves, floral brooches, handkerchief hems and newsboy caps (again, just to name a few!). Here, as the Hollywood legend emerges from a six-year long hiatus from acting, we celebrate by taking a look back at some of her most iconic outfits of all time.

After modelling for Calvin Klein and Levi’s in her teenage years, Cameron Diaz made her acting debut opposite Jim Carrey in The Mask (1994). With one comedy blockbuster under her belt, Cameron made a name for herself as one of the 90s foremost Hollywood comediennes, starring in decade-defining rom-coms My Best Friend’s Wedding and There’s Something About Mary. Here, promoting The Mask, Cameron wears a quintessentially 90s look: minimalist miniskirt, baby tee and two swipes of frosted blue eyeshadow. 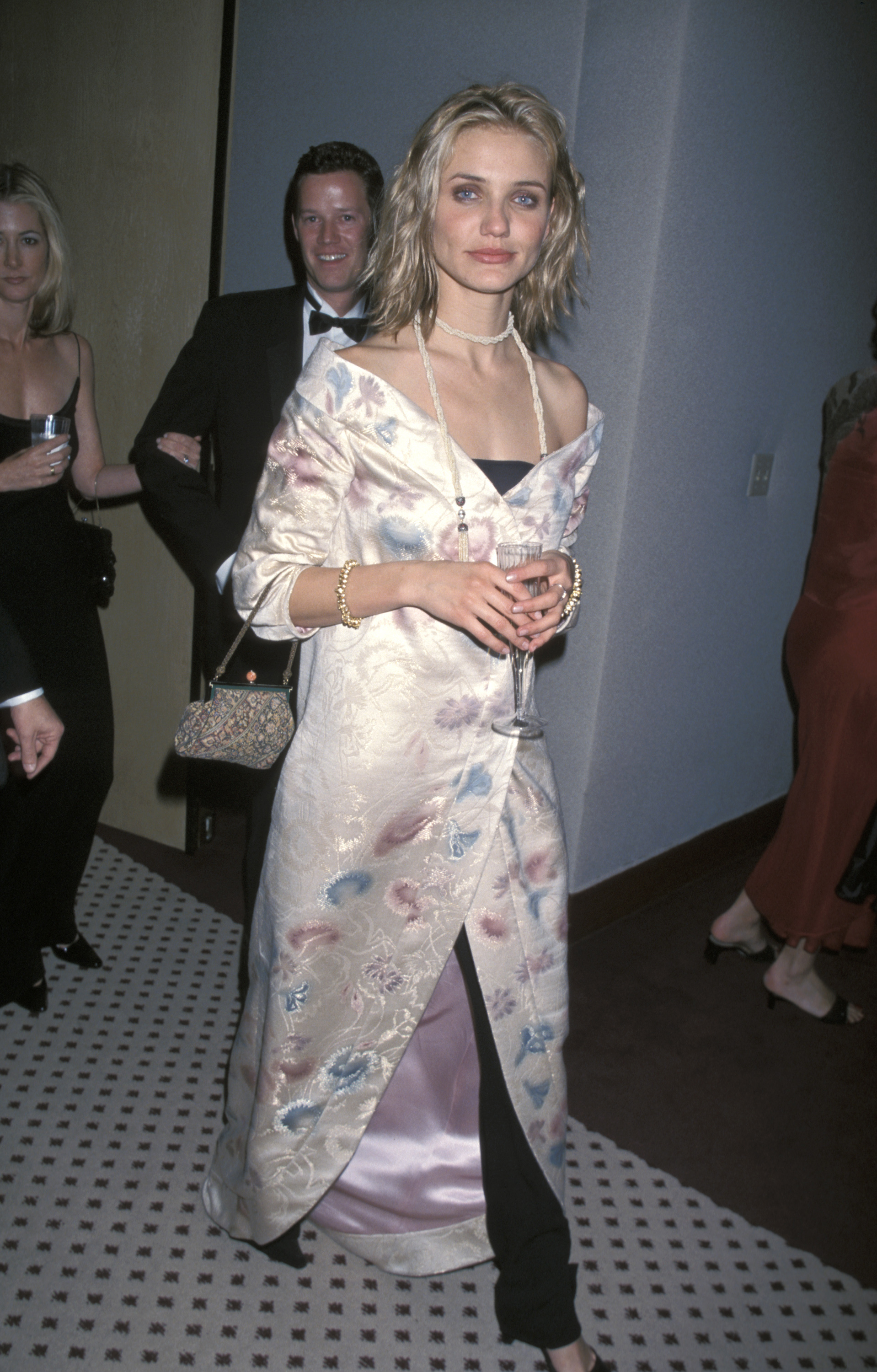 Throughout the 90s, Cameron was known for her ultra-minimalist styling as much as her comedic acting. (Think leather blazers, long slip skirts and simple fitted sweaters). By the turn-of-the-millennium, however, the actress turned her attention towards more dramatic roles — and a newly maximalist wardrobe. The same year she starred in Spike Jonze opus Being John Malkovich, Cameron attended the Golden Globes wearing this AW99 Chloé gown over top a pair of black slacks. The layered look has landed Cameron on plenty of worst-dressed lists over the years, but, looking back, we think it’s perfectly, effortlessly chic. 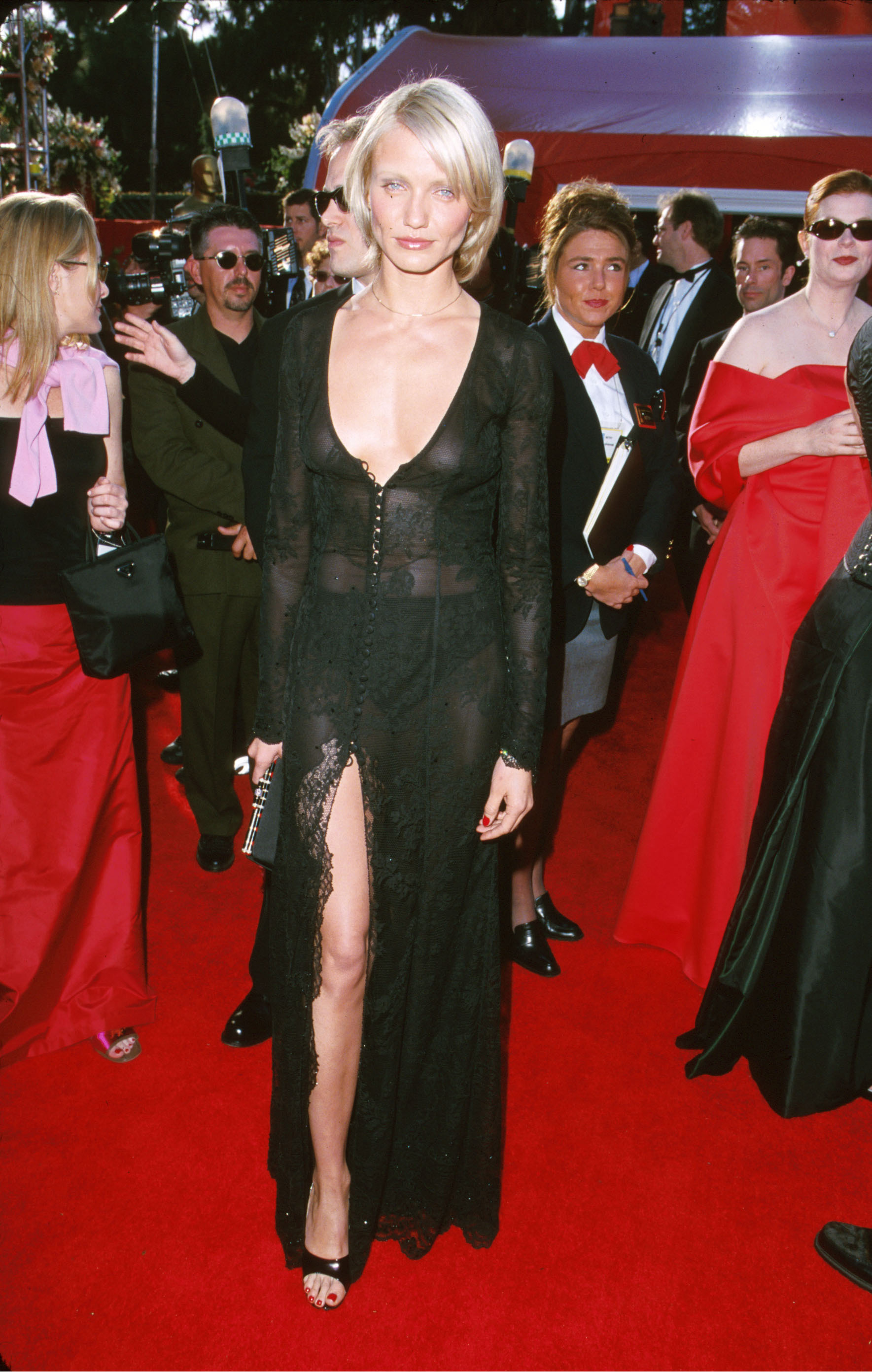 We’ve said it before, but every “it” girl simply must have her naked dress moment. And Cameron’s is utterly timeless: a plunging, lace-y number that wouldn’t look out of place in Mirror Palais’ latest drop, paired with a set of bleached brows. 2000, meets 2022. 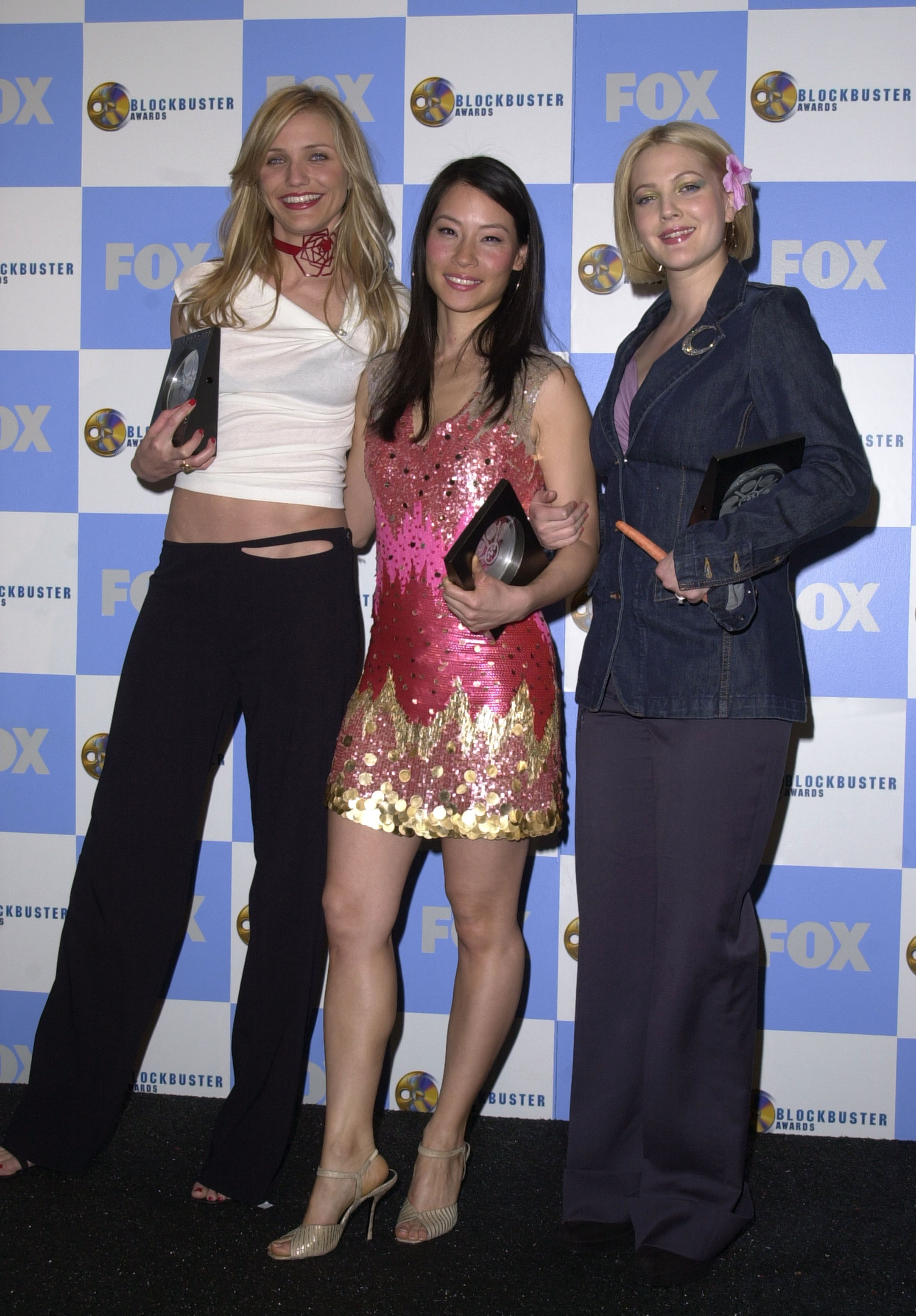 At the Blockbuster Entertainment Awards, 2001

In 2000, Cameron starred alongside Drew Barrymore and Lucy Liu in the Y2K reboot of 1970’s Charlie’s Angels. The flick, which saw the actresses playing a trio of private detectives, featured a plethora of iconic outfits: woke-up-like-this baby tees, Formula 1 fire suits, Studio 54 gowns and a trifecta of drindls. Here, Cameron, Drew and Lucy attend the Blockbuster Awards wearing a trio of their own looks, Cameron in a pair of cut-out low-riders and a floral choker necklace. 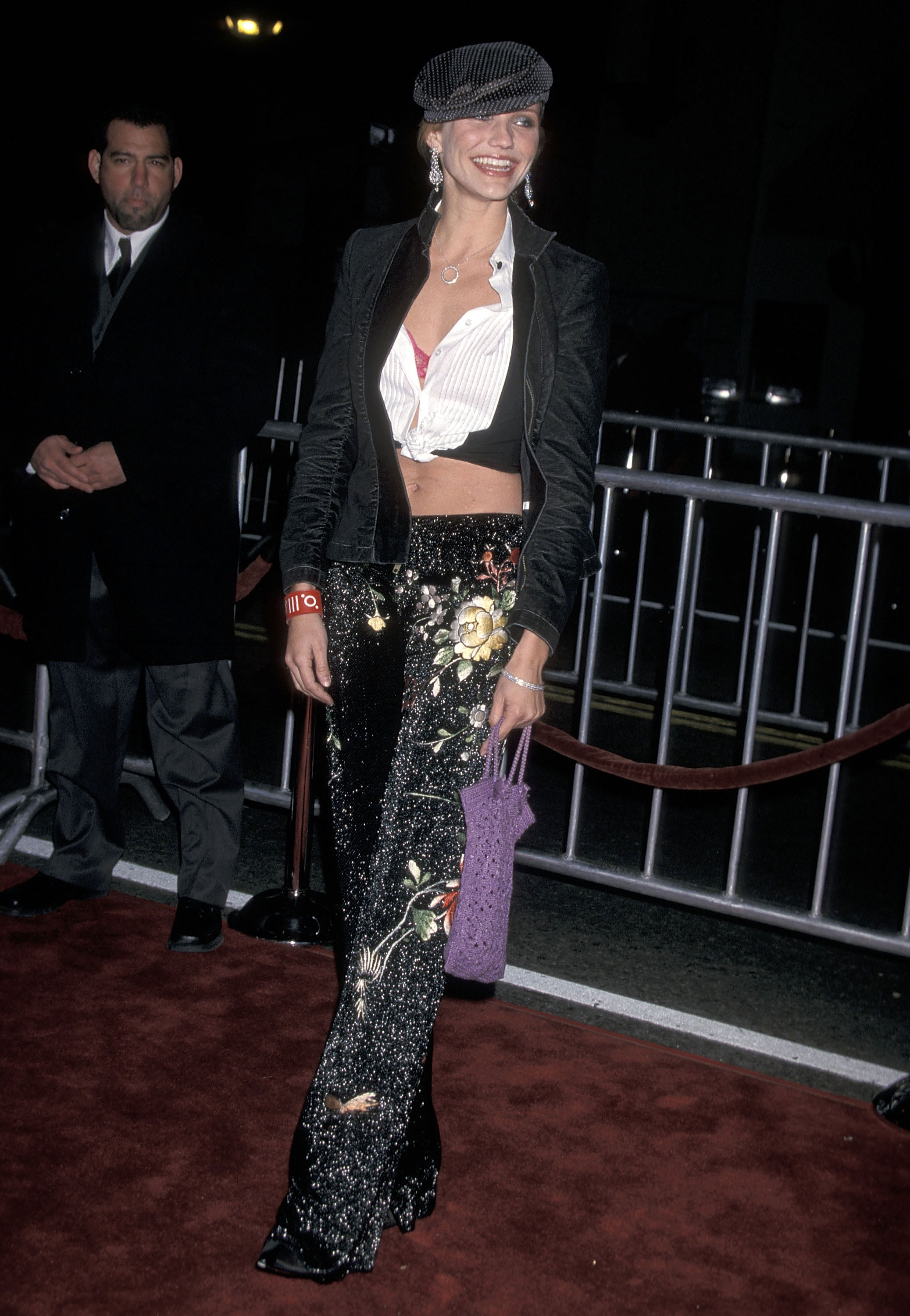 When we say Cameron was one of Hollywood’s foremost maximalists, we weren’t kidding. Here, she attends the premiere of Vanilla Sky wearing not just a pair of bedazzled-and-embroidered trousers, but a patterned newsboy cap, a purple crocheted evening bag, a pair of chandelier earrings and tuxedo shirt (knotted to reveal a bright pink bra, no less). It’s a lot… but it’s oh so Cameron. 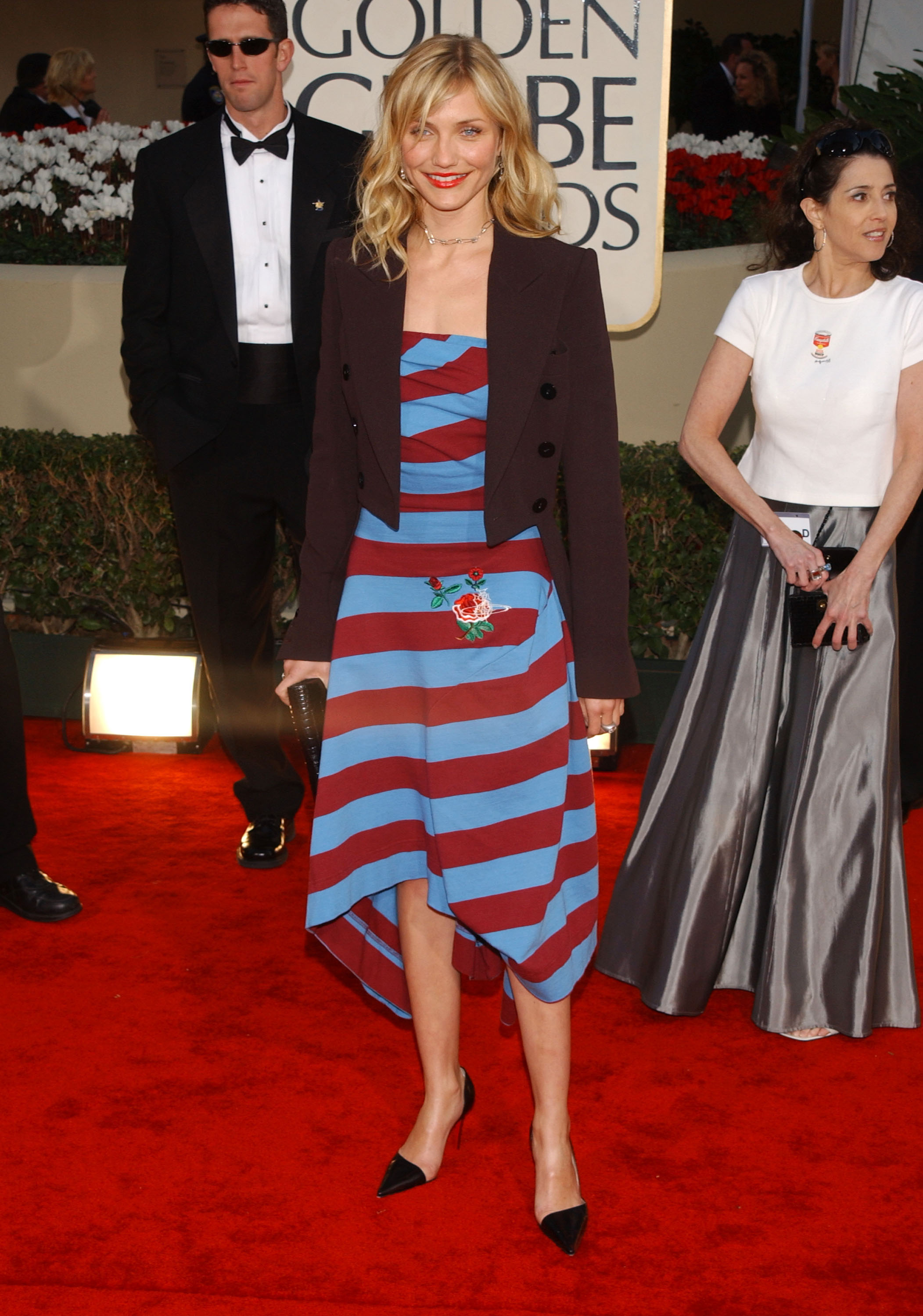 Whether wearing a super-sheer gown or layering a dress over pants, Cameron loved taking a red carpet risk. Here, to the 2002 Golden Globes, the actress threw the red carpet rule book out the window, opting for an ultra-casual jersey dress from Vivienne Westwood’s SS02 ready-to-wear collection. 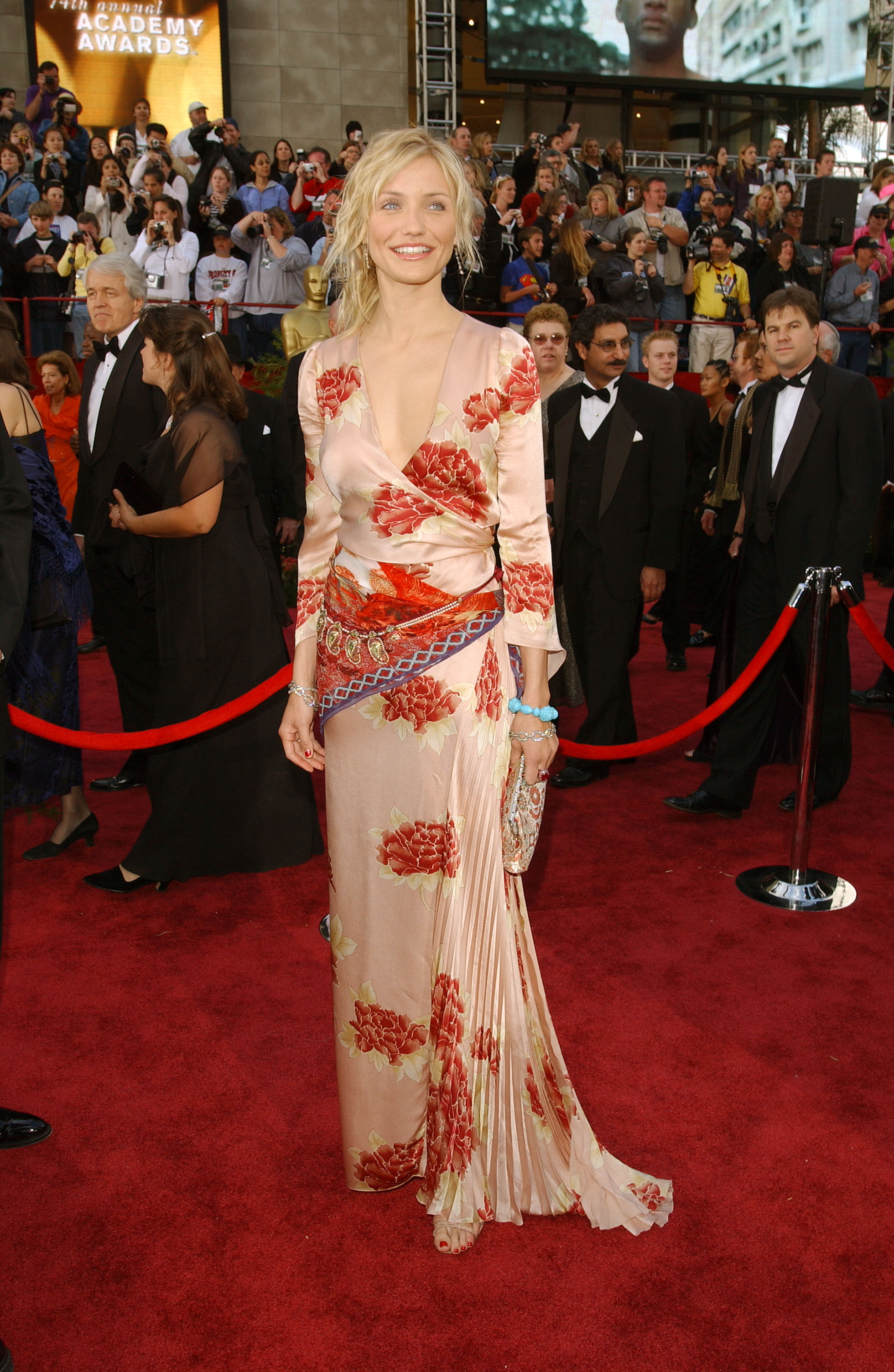 This is the Cameron Diaz look. So, can you believe that it was pulled together last minute by Cameron and makeup artist Gucci Westman? According to Diaz, the actress forgot she was supposed to attend the 2002 Academy Awards. “I literally was like, ‘Oh shit, I’m going to the Oscars, I forgot,’” she reminisced with Gucci in 2020. Luckily, the makeup artist was able to call in a favour to secure the iconic Emanuel Ungaro gown just in the nick of time. And thank god for that!