Casting your mind back to the ‘90s likely jogs memories of highly-coveted beanie babies, frosted-tips and the golden era of celebrity coupledom (See JT and Brit, Brad and Jen, Posh and Becks). For us, memories of the latter part of the 20th century also bring back sepia-toned memories of stunningly oversized silhouettes, rich fabrications and dramatically dropped shoulders. And when it comes to nailing the ’90s cool-guy look, all eyes are on a trio of actual ’90s-era cool guys… namely, Brad Pitt, Lenny Kravitz and everyone’s favourite fictional ladies’ man, Joey Tribbiani.

So, what is it about this power-trio of ‘90s dressing we love so much? Well, not only would they have dominated the cafeteria in any self-respecting ’90s high school rom-com, but between them, they run the full gamut of the decade’s style. Brad Pitt embodies the traditional heartthrob, for whom beachy blond highlights and deep V-necks were a must. Lenny Kravitz takes a more grunge-heavy, edgy route to ’90s rad. And Joey? Joey’s the boy-next-door; the everyday hunk we aspire both to look like and befriend in the hope of one day sharing a glorious evening watching Baywatch on parallel La-Z-Boys.

Looking to get the 411 on these particular brands of ’90s cool for yourself? Here we’ve dissected the looks of Pitt, Kravitz and Tribbiani for five essential style moves to lift from the polaroids and place in your wardrobe. Scroll on for the white-hot deets.

Do not be alarmed, for when we say ‘leather jacket’, we’re not talking zip-laden, tough-guy biker leathers. In this instance, we mean refined, slim-fitting blazers. Blending that most academic of silhouettes with this rugged material captures a uniquely ‘90’s rock‘n’roll energy. Done to perfection by Lenny and his adorable then-mini-me Zoe Kravitz as they attended the 1997 MTV Awards, the pick received an empowering and glamorous grunge-inspired treatment, styled in an all black ’fit and statement silver jewellery, then punctuated by a flamboyant purple fedora.

Alternatively, a budget option presents itself in a new-season Bershka blazer which also captures the essence of Kravitz’s look. Though it may be cut from a somewhat less-luxurious faux leather, its smart, slightly-oversized silhouette would no doubt make Lenny proud. Cut with structured shoulders and wide notch lapels, this jacket secures its multi-faceted appeal with a single-breasted button fastening. (£79.99 at asos.com)

An honourable mention (and a comfortable middle ground, price-wise) goes to Zadig&Voltaire’s crinkle-effect offering. Given the same single-breasted, regular-fit silhouette as Mr Kravitz’s pick, this blazer pulls on the label’s established reputation for artistic, rock‘n’roll-inspired design. Though the two pieces differ in texture (Lenny’s look is smooth and supple), the purposely creased appearance of Zadig&Voltaire’s blazer exudes the kind of effortlessly-cool energy the singer is so well-known for. (£600, at farfetch.com) 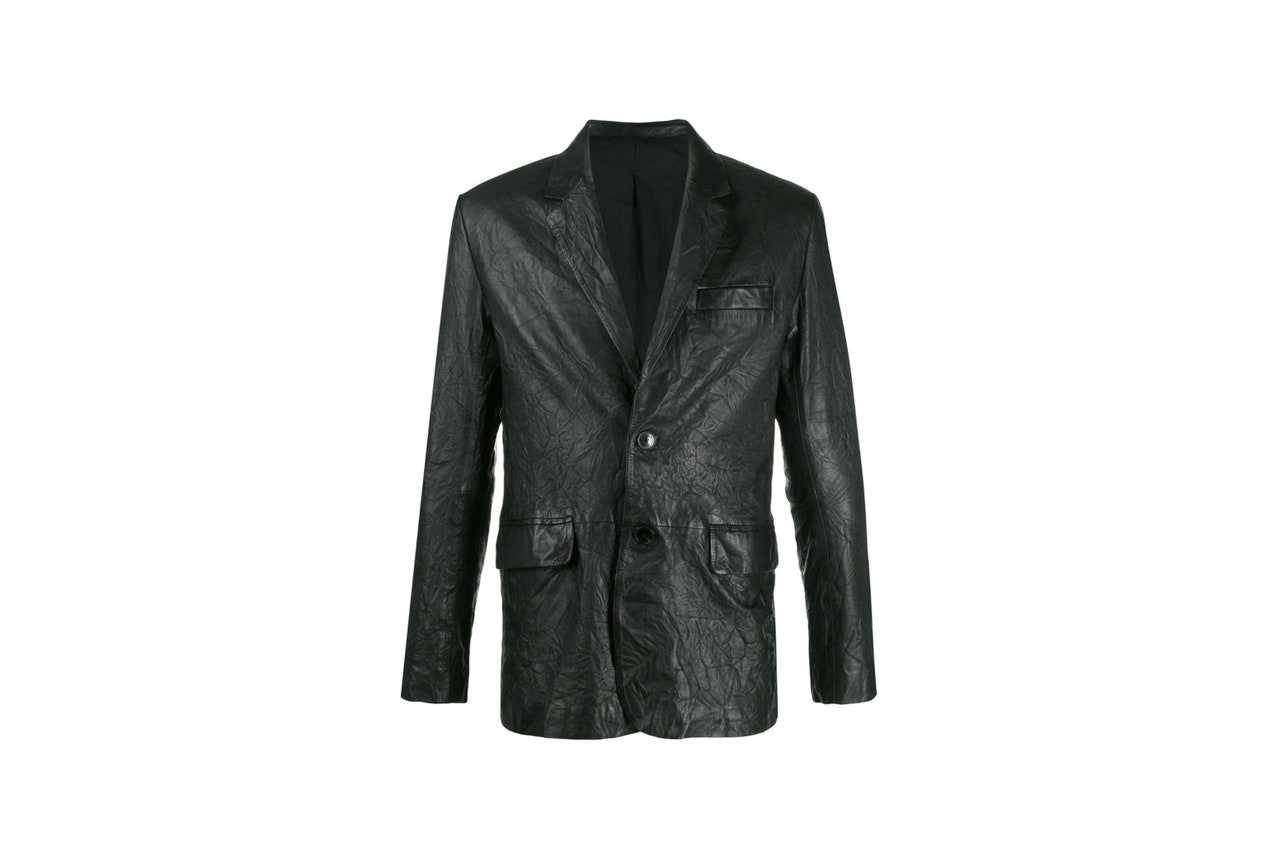